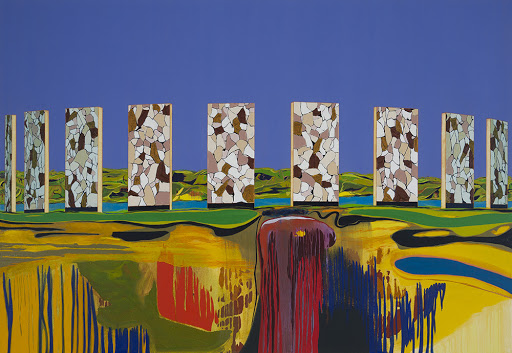 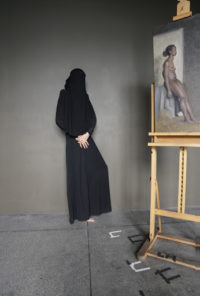 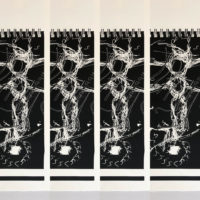 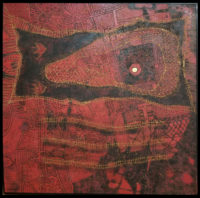 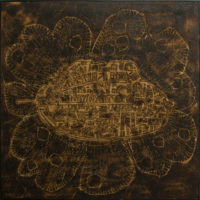 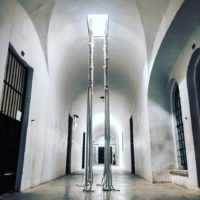 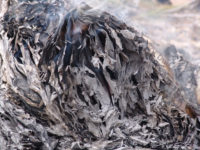 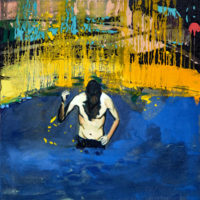 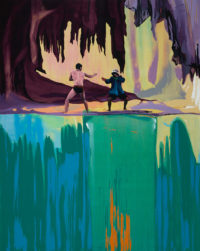 A selection of artworks presented at the Jerusalem Biennale 2017.

The exhibition Watershed Moments is an attempt to depict some of the core issues of current Jewish discourse and spirituality. The works presented here were selected from hundreds of artworks that were displayed as part of the Jerusalem Biennale 2017. Each of the works is, or can be interpreted as, a visual comment on a pressing question. Viewed together, the pieces in the exhibition portray an era of revival. It is not only that Jewish discourse is more vivid, but also that new participants are now taking part in it. Watershed Moments demonstrates how artists, and art, can become part of the discussion usually dominated by academics, rabbis and politicians.

Luz Art seeks to honor Jerusalem’s sacred identity, while spreading awareness of the diverse world that is Jewish Contemporary Art.  The fact that Jerusalem is widely known as a sacred, religious site can limit the worldly perception of what this art can be.  The Jerusalem Biennale was created to highlight the diversity within Jewish Contemporary Art.  It is a stage for artist’s whose opportunity has been limited in the art world due to their ethnicity.  The freedom of expression found in these artists is both a relatable human experience and something unique.  It is set against the backdrop of the historical and spiritual identity of Jerusalem while allowing contemporary voices to be.

Almog’s exhibition, The Space Within was inspired by her observation in Jerusalem of a group of Jewish women who were shrouded head-to-toe in black. These women were members of the small, insular ultra-Orthodox sect “Lev Tahor,” sometimes referred to as the Jewish Taliban, and they became the catalyst for works that continue Almog’s ongoing engagement with issues of women and faith. These new photographs explore veiling as an expression of a religious world-view, of femininity, and of modes of seeing and being seen.

The Space Within consists of two series: for the series “Drawing Room,” the models were posed in the studio of an art school and in Almog’s work space; in the series “Seasons,” Almog placed her subjects out-of-doors. This dichotomy of interior vs. exterior emphasizes themes of women’s confinement and freedom. Set within studios that are largely devoid of color and minimally furnished, these interiors become conceptual spaces for thinking about women as both subjects and makers of art.

Avner Sher’s works are made of sheets of cork, material charged with multilayered meanings.  The trees’ capacity for rejuvenation and the cork’s resilience to fire (like the burning bush which was not consumed), has made cork Sher’s preferred material. Maps of Jerusalem is a series based on ancient and contemporary maps of the Old City, each with a different emphasis on the perception of the area of less than a square kilometer as seen by various religions. The Temple Mount is prominent, decorated with gold leaf, but not necessarily in its location; the size and placement of other sites, such as the Holy Sepulcher, are marked according as the mapmakers wish to do so, reflecting desires which are stronger than geographical fact.

“Our hands have not shed this blood, nor did our eyes see it. Forgive Your nation, Israel, whom You redeemed, Lord, and do not lay innocent blood amongst Your people, Israel”

The walls of the study hall might be superficially perceived and portrayed as fortified, stable boundaries. After all they represent tradition and the limits constituted by tradition. Yet, the study hall as an ongoing realm of dialectical renewal and inspiration is forever recreating those boundaries from within. This work suggests that an excerpt from a sketchbook on perishable paper may better portray the transient tendency of those boundaries and walls. 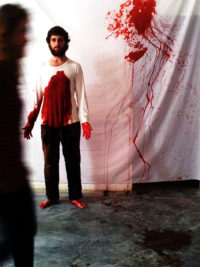 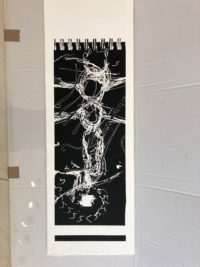 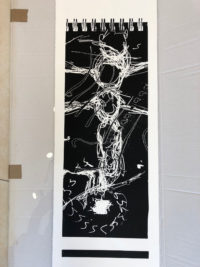 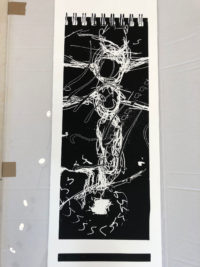 The Yeshiva, or Beit Midrash, is the place for learning Torah as well as a a gathering place where the community meets and learns the Jewish tradition, with all its arguments and disagreements. Kerem Beyavne is a Yeshiva close to the Kibbutz I was born and raised in, and the view of the round Beit Midrash always drew my attention and imagination. In my painting there are no windows, no ceiling and no people. Only a few standing walls remain, reminding one of  the ancient Stonehenge; spectacular, mysterious, yet lacking whole.

Two figures stand in front of each other in a cave. They are distant from the viewer, their faces hidden. Is this a game or a confrontation? The question remains open. The cave is sometimes a womb and sometimes a studio – a space to close up and to disregard the outside. The painting is mostly abstract, made of large movements and light spilled paint. As opposed to the lightness of the view, the figures are drawn in a familiar concrete language. In between the abstract and the concrete, my painting is born.

A figure is dipping in a Mikveh. The act of dipping is related to cleansing, renewing and becoming purified. In this painting, the figure is holding up his fist, his face hidden and facing the viewer. Behind the figure there is a dynamic space of colorful happening and although painting is a silent medium, the sound of splashing water is heard, a subtle drama happening right now. At first, it seems the painting is the exact opposite of David Hockney’s A Bigger Splash (1967), which has no human figures in it but the splashed water indicate something happened. Hockney’s painting, as well as this one, ask questions regarding abstraction, representation, the role of painting and the painting’s limits.

Cutting edge and thought-provoking, Weiss’ work is currently included in the permanent exhibition at the Israel Museum. Based on the paper throw-away coffee cup, Weiss designed Kiddush To-Go. This artefact of our modern, highly caffeinated life has been re-cast into a Kiddush cup in silver and gold.  A limited edition series of Kiddush To-Go  has been produced especially for the Jerusalem Biennale- each piece numbered and presented in a box designed by the artist. 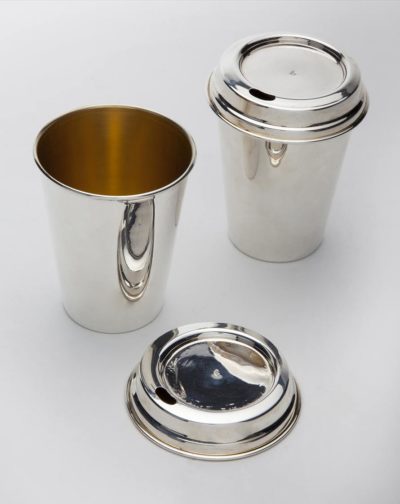 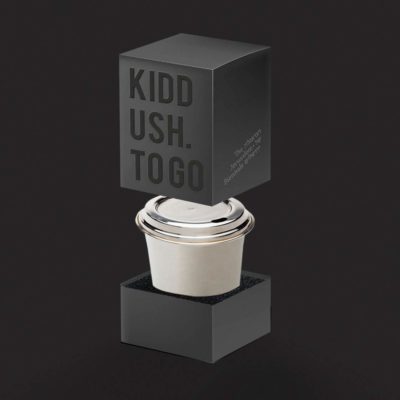 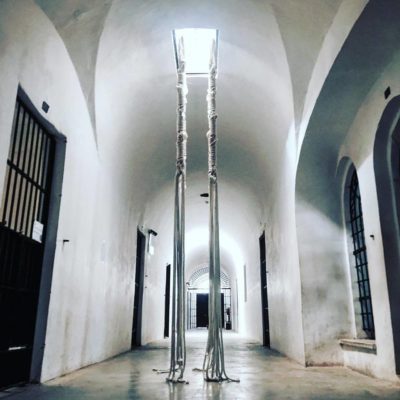 Paley graduated from Shenkar College of Engineering and Design, Tel Aviv in 2017. Her thesis project, “A Fringe of Her Own” (Shenkar, 2017), led her to receive the prestigious America-Israel Cultural Foundation scholarship.

“A Fringe of Her Own” presents Paley’s collection of handmade Jewish ritual objects that deconstruct and reinterpret the tallit, tzitzit and tefillin, typically worn by men.

Recognizing the gap that exists between Jewish women and these ritual objects — and with a growing need to provide a feminine interpretation of religious practice —Paley’s work offers a reshaping of traditional patriarchal forms from a female perspective using materials, text and symbolism that acknowledge the physical and spiritual experiences of women in Judaism. 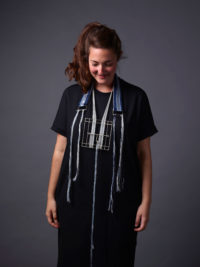 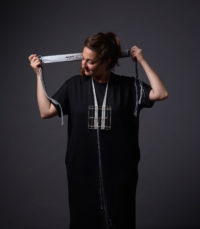 The work “The Rabbi’s Daughter” is a performative action in the community synagogue in which the artist’s father is the chief rabbi.

The work evokes the multiple identities of the artist, as an orthodox Jewish woman and daughter of the rabbi on the one hand, and as an activist artist on the other.  She creates her courageous and extraordinary protest, which expresses clarity and determination of a contemporary feminine voice with a deep connection to traditional heritage.

In the series Land of the Deer, Koskas captures on paper the essence of the Land of Israel and populates it with images of an elusive deer. In several places in the Hebrew Bible, and apparently also in the phrase “land of the deer” itself (Daniel 11:41), the word “deer” signifies splendor, beauty, and glory, and this image denotes beauty. According to the Talmud, the deer’s hide is flexible and similarly, the Land of Israel can expand to accommodate tens of thousands.  For Koskas, the idea that the boundaries of the land, which are finite, can accommodate an infinite number connects to the concepts of beauty and joy, because joy involves the recognition of infinity.

Barmatz-Harris’ video Where She Burns turns water to fire in pushing history backwards: from the crucible of Jerusalem’s return to Jewish hands through the Shoah, and the connotations of fire in Hassidic mystical thought to the book-burnings of diaspora experience and the burning of the Second and First Temples to the purification process of the Israelites in the wilderness by means of the burning of Red Heifer.

Signup Today and keep up to date with Exhibition new, Special Offers and New Items!