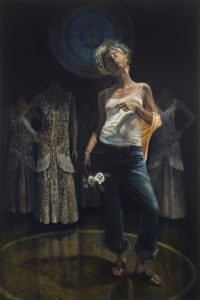 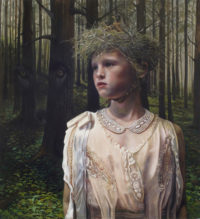 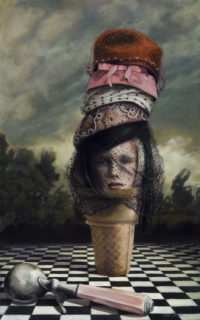 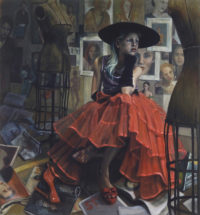 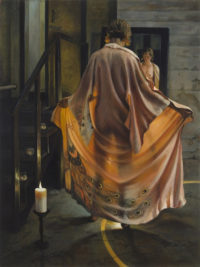 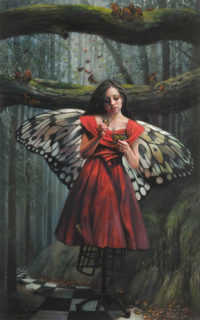 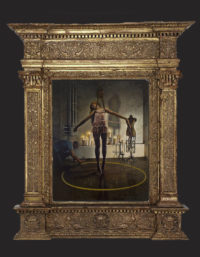 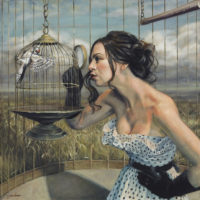 A BEAUTIFUL LIE
by
Regina Jacobson
A synthesis of my background in ﬁne art, fashion and religion, my work is expressed in three groups following a progression of thought: The Cult of Beauty, Woods and Groves and Curiouser is a series of contemporary representational ﬁgurative oil paintings portraying a social-philosophical narrative. Based on the concept that the human spirit longs for love and acceptance, these paintings examine how a delicate self-worth can be undermined in a society where standards of idealized beauty seem hallowed and venerated.

THE CULT OF BEAUTY
Treated as a religion,The Cult of Beauty depicts isolated female ﬁgures in religious-like rituals of prayer, worship, marriage and even sacriﬁce. Some are shown caught in the moment of choosing “whether to” or “how to” appease this idol of beauty. Both Biblical and Occult references are made in order to enhance the paradox of freewill and servitude while broaching the underlying theme of “Choice.” Vintage fashion industry props and ﬂesh-toned foundational garments set the time and help stage the darkened personal environment of these paintings which promote a voyeuristic observation of human nature’s vulnerability when caught in the universal struggle for acceptance.

Wanting to enhance the religious overtones of idolatry, I’ve allowed the work to take on the voice of an Old Testament prophet whose message would often warn a nation of the ensuing consequences brought about by their choice to serve other gods – gods that were made by the work of their own hands and represented by the Dress Form in the Cult of Beauty. While I found symbolic inspiration in the Major Prophet books of the Bible, the most important signiﬁer in The Cult of Beauty came from the combined writings of Dante, J.R.R. Tolkien and C.S. Lewis. I’ve used the circle, or ring, as a gauge of measurement to signify how the ﬁgure views herself as either accepted or rejected, while developing the narrative of choice around the actions she feels motivated to take in order to move in or out of this arena or to maintain her position within. The circle may suggest a sense of servitude, bondage or conﬁnement in one painting, while signifying a condition of individual strength in another.

WOODS AND GROVES
To broaden the narrative of idolatry and choice I have taken the ﬁgure out of their solitary environment of the Cult of Beauty and placing them in Woods and Groves. Woods are legendary in literature and fairy tales; pictured as frightening dark places, they represent a hostile environment where enemies hide and dangers lurk – Little Red Ridding Hood meets the Big Bad Wolf. Historically Groves were marked sites of idol worship and human sacriﬁce, while Mythology tells stories of the lusty exploits of women and treacherous pools of water where the hearts and minds of self-indulgent wanderers could be overwhelmed and transformed by peering too long at their own reﬂection. 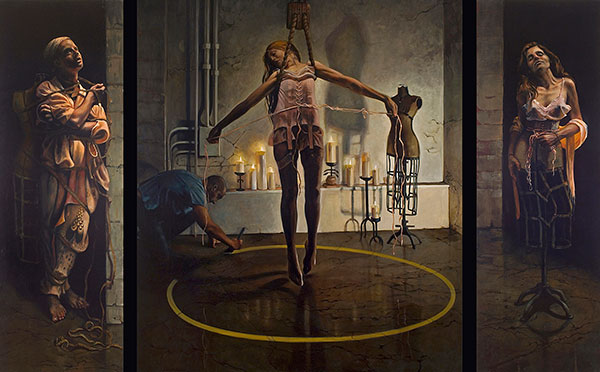