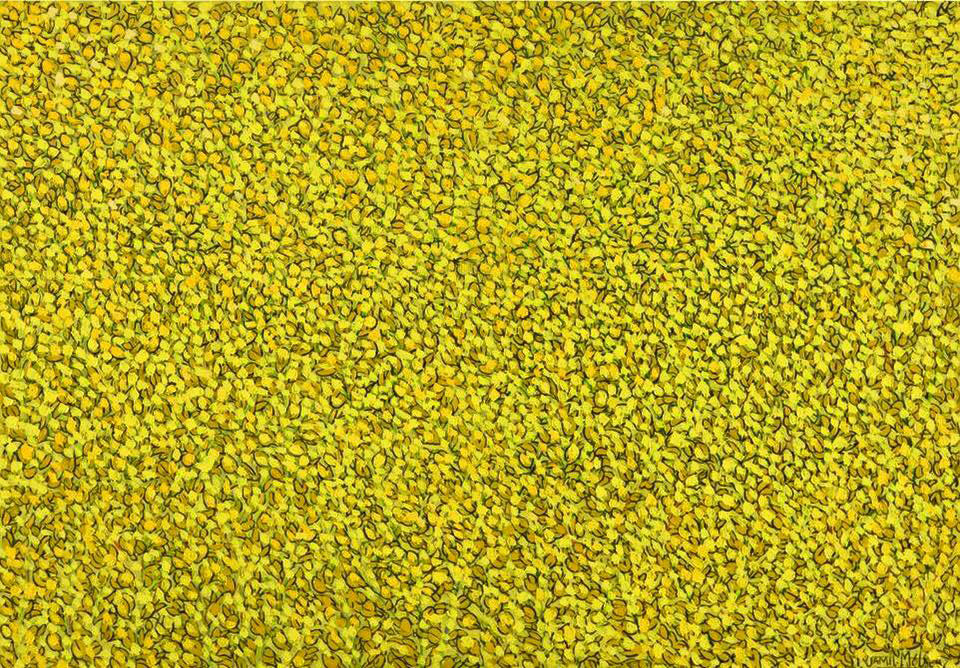 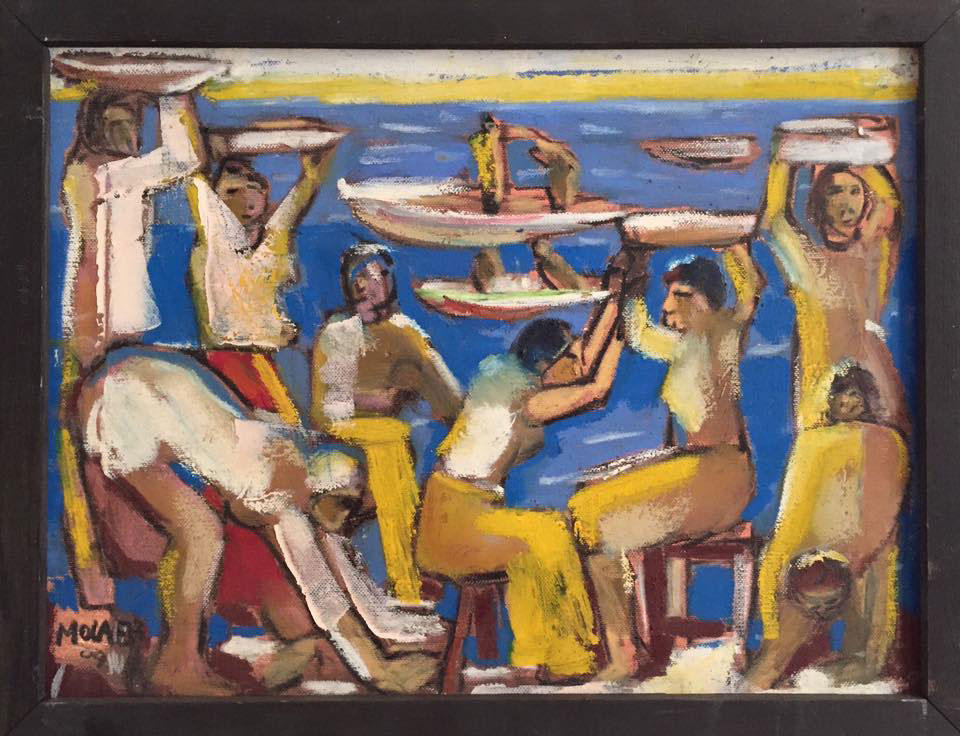 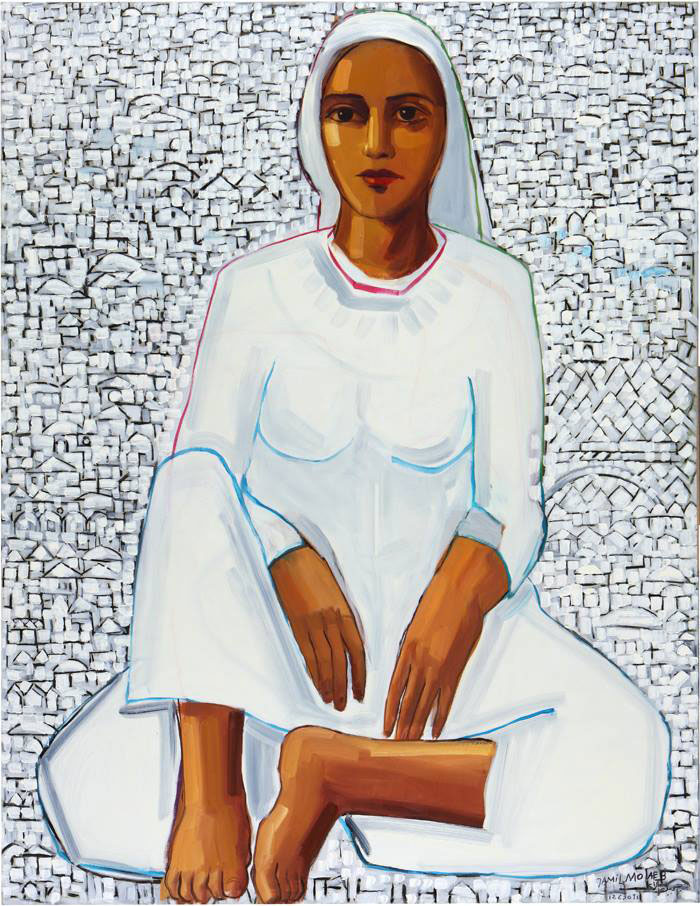 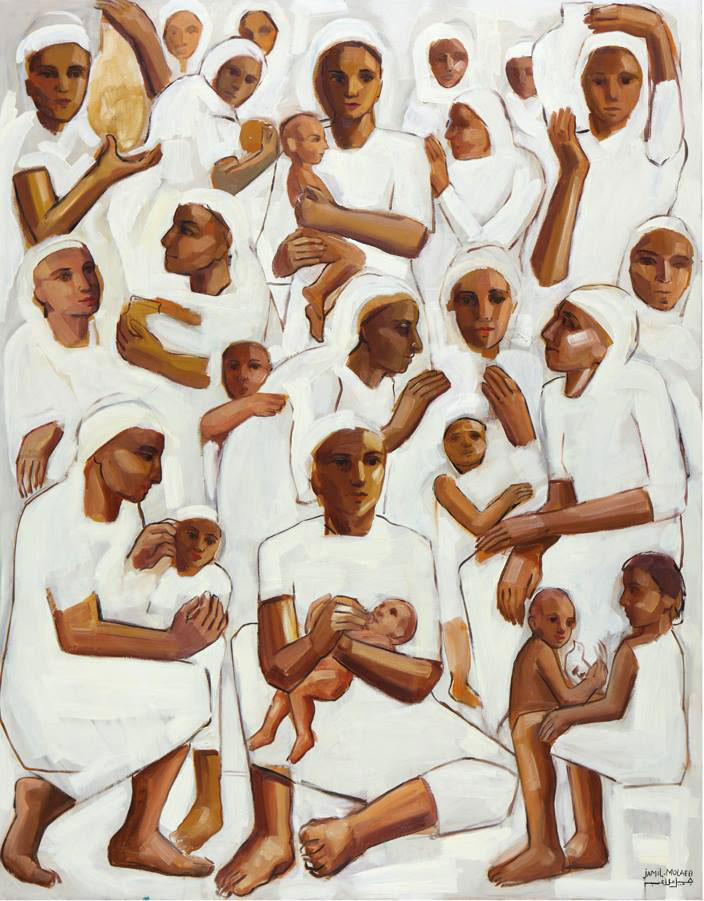 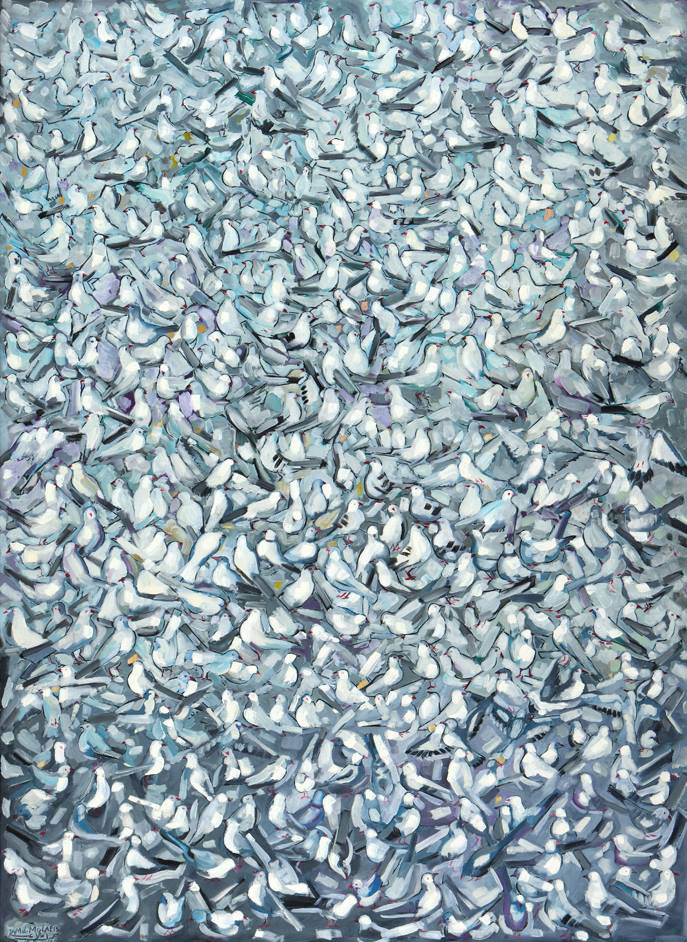 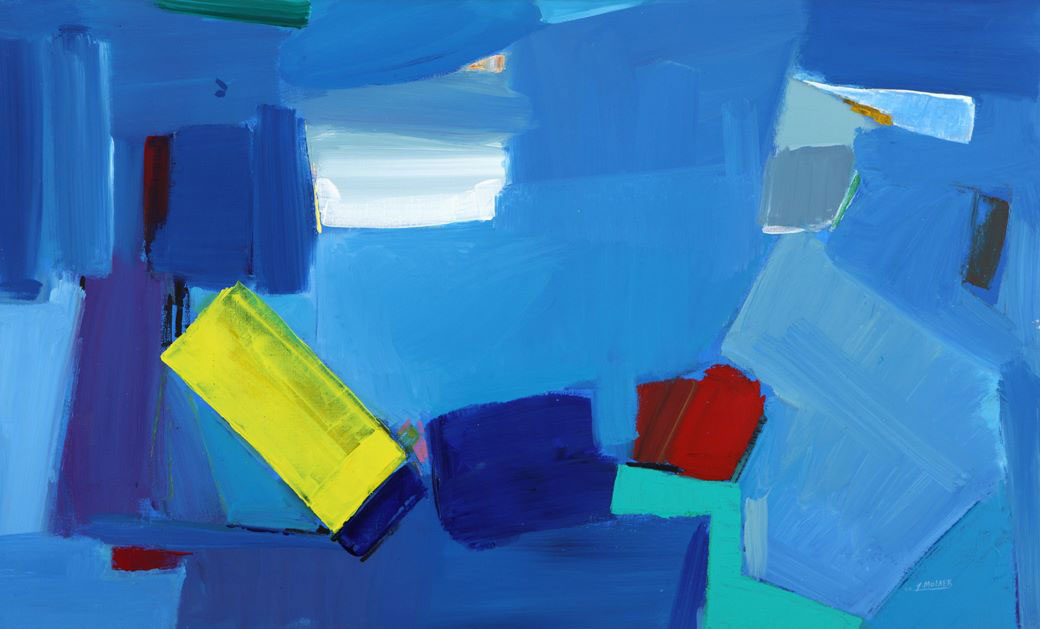 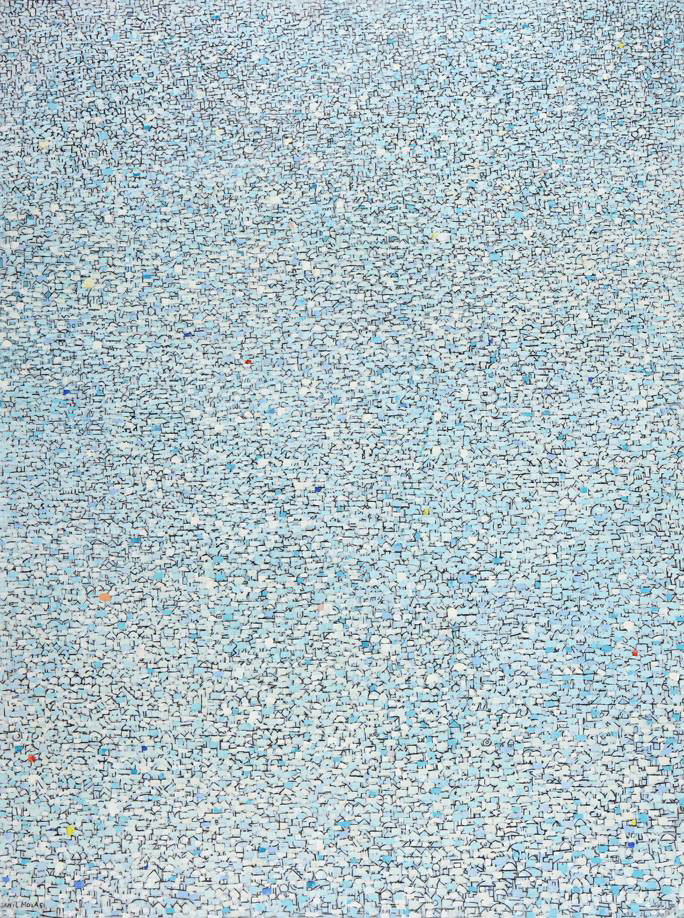 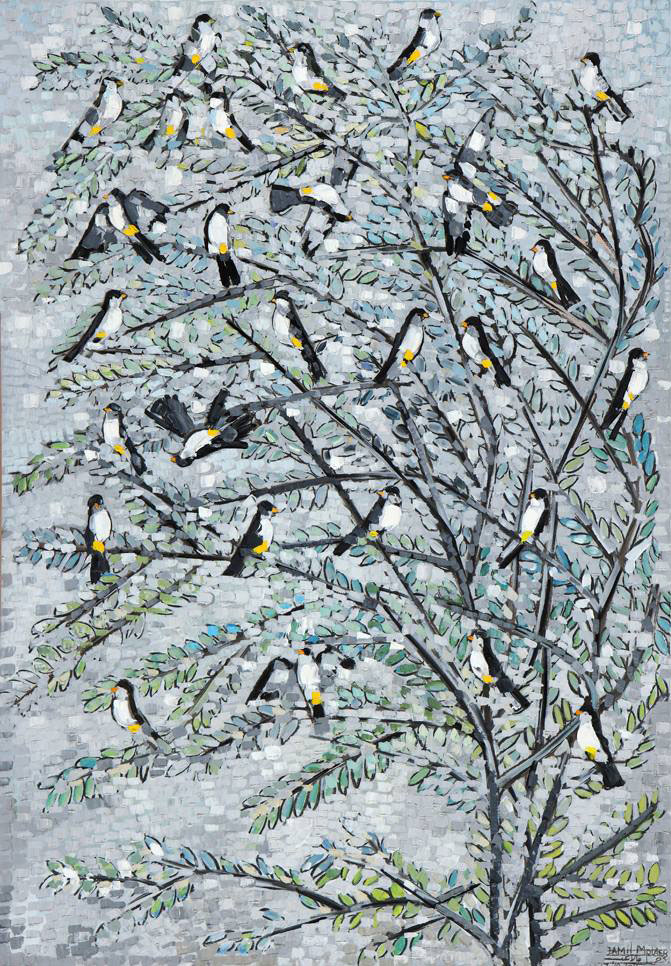 Molaeb started his artistic career in the seventies, after training under renowned artists such as Chafic Abboud and Paul Guiragossian at the Fine Arts Institute of the Lebanese University.

Craving further discoveries and exposure to the world, he spent a year studying in Algeria and, in 1984, enrolled in the Master of Fine Arts program at New York’s Pratt Institute, to later obtain a doctorate in artistic education from Ohio State University.
Back in his native country in 1989, Molaeb started teaching art at the Lebanese University and the Lebanese American University of Beirut.

Since 1966 he has held different solo and group exhibitions in Lebanon, Algeria, and the United States, particularly New York. Between 1967 and 1972, he held 2 exhibitions at Dar El fan, and then with Galerie Janine Rubeiz in 1994, 1995,1996, ‘’Sunday’s Promenade’’(1998) “Landscapes and Spaces” (2000), “Azur” (2002), “Daily Life” (2004), “Glance: Past and Present!” (2005), “Brushes for feathers” (at Sursock Meseum 2006), “Serenity”, “Recent Works” (2008), “Yesterday and Tomorrow” (2011), ‘’Alphabet of Reality’’ (2013), and “Xylographie-Woodcuts” (2014). His work has been showcased with Galerie Janine Rubeiz in a number of Art Fairs: Art Abu-Dhabi, Beirut Art Fair, Art Dubai and Art14 London. He participated in different sculpture symposia in 1999 and in 2003 he took part in the International Sculpture Symposium of Bahrain-Manama and in the large exhibition «Rebirth» at the Beirut Exhibition Center (2011). He has published 4 books and recently, in 2014:”Xylographies-Woodcuts” with Galerie Janine Rubeiz. In 1967 he won the 3rd prize of sculpture at 7th Salon of the Sursock Museum and in 1995 a special distinction in Painting at the 18th salon of the Sursock Museum.
Jamil Molaeb’s work has been acquired by public and private collections including The World Bank in Washington DC and has been sold in international auctions. Molaeb’s work is permanently on display at Galerie Janine Rubeiz.

Molaeb is a curious mixture of a thinker and mystic. He shows throughout his abstract work his interest in the Druze cabalistic tradition and the way it conflates notions of boundless space with divine light.

Jamil Molaeb’s signature paintings conceive of the color field – the ultimate destination for an abstract painter -as a traditional landscape, and evokes through those minimal pictorial frameworks, the magic simplicity of miniatures and icons. In his large colorful paintings, constructed in a simple identical operation, symbols emerge out of their alphabet and bifurcate into solid architectural forms, creating uncanny aerial like views, operating often as cultural archetypes. There is also a place for genre painting, however executed in an expressionist style, while not shying away from the folklore element. In his woodcuts, Molaeb demonstrates a unique skill to converse between parallel techniques, temporalities and concepts: Resorting to a traditional technique, inherited from the Italian 15th century (coeval with the first oils on canvas), the artist deploys quintessential modernist strategies that would be easily read by the expressionist and post-expressionist painters of Europe, indubitably alerted by his bright palette combined with primal archetypes, characteristic of pre-classical art. 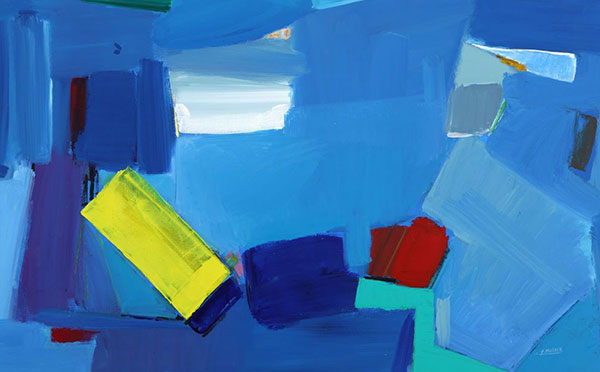