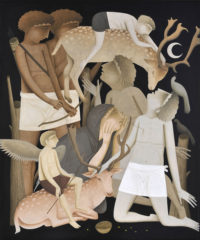 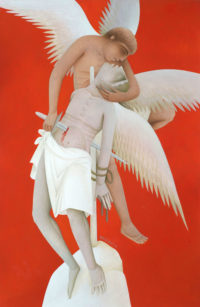 Fikos was born in 1987 in Athens where he still lives. From a young age he painted whatever he saw around him, such as comics, landscapes icons and more.

At the age of 13 he started studying Byzantine painting under the guidance of George Kordis, with whom he also collaborated professionally for 5 years painting murals in Orthodox churches, while at the same time developing his own personal painting style.

In terms of technique, his portable icons are painted using egg tempera on handmade Japanese paper which is glued onto wood, and his murals are painted in acrylics.

Having a background as a graffiti artist and an iconographer in Orthodox Christian churches, Fikos is continuing his developmental journey by painting murals in public places. The value of these works is exceptional, because it is the first time that the monumental byzantine technique meets a contemporary movement such as street art.

The themes of his murals emanate from the Orthodox Christian tradition and ancient Greek mythology respectively and they are related to the places where they are presented, but also didactic.

Fikos’ painting is not just another artist’s “self-expression”, but a social event a true “creation” (“demiurgia” = demos “citizens” + ergon “work” – a work for the citizens-society

Besides Greece, his work has been exhibited in France, Bulgaria, England, Ireland, Ukraine, Austria, Lithuania, Switzerland, Norway and Mexico, in exhibitions and museums, television and radio and in private and public places.

Fikos’ vision is the popularization and recognition of contemporary Greek painting at an international level, not as a nostalgic accomplishment of the past, but as a contemporary universal event. 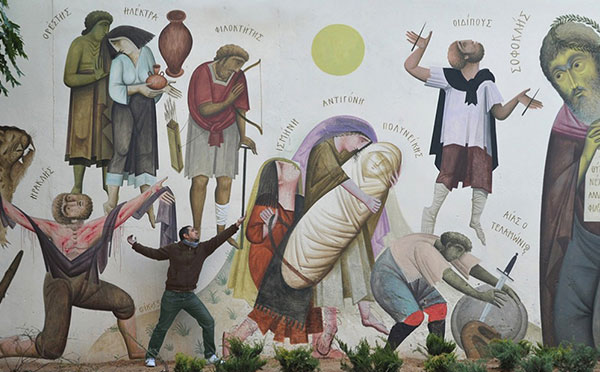